There is nothing worse than enjoying a good meal only to feel sick, hours or sometimes days later from something you ate. Most Americans experience it at some time with the CDC estimating that some 48 million get sick from a foodborne illness each year.

While the experience from a foodborne disease, also called food poisoning, is usually a temporary inconvenience, it can be serious and even deadly with  the CDC estimating 128,000 hospitalizations and 3,000 deaths per year from foodborne germs.

The Causes and Symptoms of Foodborne Illness

It may surprise most people to learn that there are a lot more than a handful of germs responsible for food poisoning, with researchers identifying more than 250 foodborne diseases.

Harmful toxins and chemicals also can contaminate foods and cause foodborne illness.


The telltale signs for food poisoning are symptoms such as diarrhea, nausea, stomach cramps, and vomiting.

Groups susceptible to foodborne illnesses include:

common foodborne germs that cause illnesses from food eaten in the United States:

Campylobacter: This germ causes as estimated 1.5 million illnesses in the United States each year. You can get Campylobacter by eating raw or undercooked poultry or something that touched it.

Clostridium perfringens: These bacteria cause nearly 1 million illnesses in the United States every year. C. perfringens can be found on raw meat and poultry, in the intestines of animals, and in the environment.

Common sources of C. perfringens infection include meat, poultry, gravies, and other foods cooked in large batches and held at an unsafe temperature. Outbreaks tend to happen in places that serve large groups of people, such as hospitals, school cafeterias, prisons, and nursing homes.

Most people with C. perfringens infection develop diarrhea and stomach cramps within 6 to 24 hours after eating contaminated food. The illness usually begins suddenly and lasts for less than 24 hours. Most people recover without antibiotic treatment.

Norovirus: This contagious virus, which causes vomiting and diarrhea, is the No. 1 “stomach bug” in the United States. People can get norovirus from having direct contact with an infected person, consuming contaminated food or water, and/or touching contaminated surfaces and then putting your unwashed hands in your mouth.

Norovirus outbreaks, which occur most often from November to April, can spread very easily. People can avoid spreading norovirus between each other by staying home when sick and two days after symptoms stop, and by not preparing food for others when sick or 48 hours after the last symptoms.

Most people usually develop symptoms 12 to 48 hours after being exposed to norovirus. Most people with norovirus illness get better within 1 to 3 days.

Salmonella: CDC estimates these bacteria cause about 1.35 million infections each year in the United States and are responsible for 26,500 hospitalizations and 420 deaths.

Food is the source for most illnesses from Salmonella, which live in the intestines of people and animals. Besides eating contaminated food or drinking contaminated water, people can get Salmonella by touching infected animals, their feces, or their environment.

People who get food poisoning from Salmonella may experience diarrhea, fever and stomach cramps with symptoms usually starting 6 hours to 6 days after infection. Illness usually lasts between 4 and 7 days.

Staphylococcus aureus (Staph): A quarter of the population and animals carry Staph on their skin and in their nose. While it usually does not cause illness in healthy people, it can make toxins that can cause food poisoning.

People who carry Staph can contaminate food if they do not wash their hands before touching it. Sliced meats, puddings, pastries, and sandwiches are especially risky if contaminated with Staph.
Staph bacteria can multiply in food, producing toxins. While Staph is killed by cooking, these toxins can live, causing illnesses.

Symptoms, such as nausea, vomiting and stomach cramps, typically start suddenly within 30 minutes to 8 hours after eating or drinking contaminated items. Severe illness is rare and symptoms rarely last longer than 24 hours.

Rare Foodborne Germs that Can Lead to Serious Illness

Some other germs do not cause as many illnesses, but when they do, the illnesses are more likely to lead to hospitalization. Those germs include:

Clostridium botulinum (botulism): Botulism is a rare but serious illness caused by a toxin that attacks the body’s nerves.

Symptoms of botulism usually start with weakness of the muscles that control the eyes, face, mouth, and throat, and can spread to the neck, arms, torso, and legs. Botulism also can weaken the muscles involved in breathing, which can lead to difficulty breathing and even death. 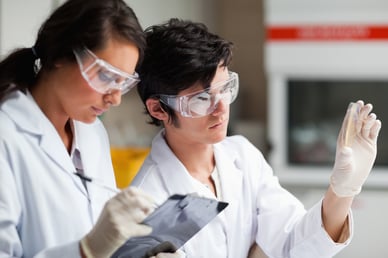 Foodborne botulism can happen with homemade foods that have been improperly canned, preserved, or fermented.

Escherichia coli (E. coli): This large and diverse group of bacteria are often harmless, but some strains can make people sick.

E. coli can be found in the environment, foods and intestines of people and animals. When infected, people can experience diarrhea, urinary tract infections, respiratory illnesses, and pneumonia.

Listeria: Some 1,600 people get sick, with 260 dying, from serious infections caused by eating food contaminated with these bacteria.

Vibrio: These bacteria cause an estimated 80,000 illnesses and 100 deaths in the U.S. each year.

Consuming raw or undercooked seafood or exposing a wound to seawater can cause Vibriosis. Most infections happen when water temperatures are warmer from May to October.

Created with our customer's needs in mind, Fresh Byte Software provides an inventory and accounting management system built to increase gross profits and minimize costs for wholesalers, distributors, and manufacturers. Are you shopping for new software that will help you manage your business? Contact us today, we have the solution for you.